The TrustoCorp art collective, based in New York, is an anonymous artist or group of artists that create(s) satirical street signs and other prank-art installations in cities across the US. Almost nothing is known about the group, but their timely art created quite a bit of public interest. 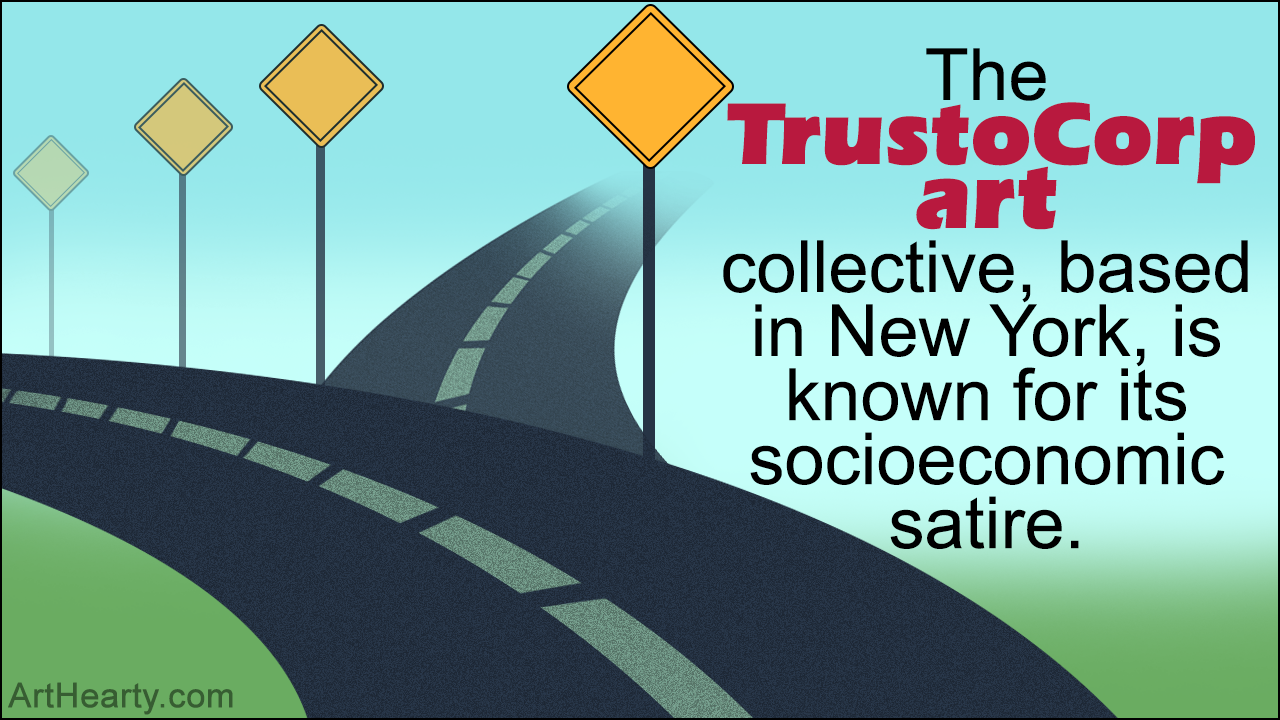 The TrustoCorp art collective, based in New York, is an anonymous artist or group of artists that create(s) satirical street signs and other prank-art installations in cities across the US. Almost nothing is known about the group, but their timely art created quite a bit of public interest.

Since at least 2010, an artist or art collective called TrustoCorp has been creating artistic pranks satirizing American life and culture. TrustoCorp has managed to retain its anonymity despite receiving quite a bit of media coverage since its inception. At the time of this writing, the identity of the artists behind TrustoCorp remains unknown. In fact, no one even knows how many people belong to this collective. What we do know is that TrustoCorp’s satirical product labels and street signs seem to be a perfect fit with the world we live in.

In 2010, TrustoCorp started creating product labels and packaging and placing them in and amongst real products on store shelves. One humorous example was a soda can that the artists ‘stocked’ near sugary sodas in supermarkets. The gold, blue, and yellow can featured the TrustoCorp logo above the words ‘Nose Job in a Can’. Underneath the product’s title were printed instructions for use: ‘Step 1. Grab Can. Step 2. Smash Face’.

Along with satirical product labels, TrustoCorp has created imitation street signs and attached them to posts in cities across the US. New York, Miami, Los Angeles, San Diego, and San Francisco have discovered TrustoCorp’s signs on their streets. The signs are made of metal and designed to look similar to official street signs. For example, a black sign with a white arrow mimics the standard ‘One Way’ sign, but instead reads ‘One Day’. Underneath the arrow in smaller type, these signs add messages like, ‘When Hell Freezes’, and ‘Things Will Get Better’.

The collective’s website, TrustoCorp.com, maps locations in Manhattan where the street signs have appeared. The careful observer will note that, when connected, the locations form the shape of, perhaps, a fist raising a middle finger. Altogether, the TrustoCorp phenomenon seems like something that could only have happened in a futuristic sci-fi novel, but the group’s success indicates that the future is here.

Just what kind of a world we’re living in is the subject of TrustoCorp’s art; the collective seems to be poking fun at many elements of American culture, including the fast food industry, big business, the financial sector, and religion. At a gallery opening in New York City, the group created a carnival-style game where people attempted to knock over plates that displayed images of cultural ideals. The game was rigged so that religion, big business, and a few other plates could not be knocked over-a symbol of the hegemony of these institutions over the American way of life.

TrustoCorp’s aesthetic tends toward a retro-kitsch look. Blending retro styles with design that evokes official signage and packaging lends to the group’s appeal. The style strikes an essential balance between whimsy and social commentary, which has probably had something to do with the astounding degree of publicity that TrustoCorp has generated. The artists are not unrealistic about their activities, however. Their public statements are few and far between, but they have expressed the modest aims of breaking up the monotony of daily life and giving people something to smile about.

The art collective seems equally realistic about its chances of having a lasting impact. In homage to their clear ideological predecessor, Andy Warhol, the group created a street sign establishing a ‘Fame Limit’ in the style of parking regulation signs. The Fame Limit, of course, is 15 minutes, and according to the sign, it’s strictly enforced weekly from 9pm to 5am. Maybe that’s a signal that the artists of TrustoCorp haven’t quit their day jobs just yet.