Home / Uncategorized / Shocking Art Finds That Surprised Us All In 2019

As an industry, new art discoveries are being found all the time. Whether it’s a painting abandoned in an attic somewhere or a long lost finding buried underground, art is hiding in plain sight.

In 2019, there were tons of new art discoveries that made big bucks and even blow some minds. For art history lovers, these finds unearth a unique feeling of anticipation and hope. After all, what haven’t we found? And how cool would it be to be a part of history?

Here are some of the most shocking art finds of 2019.

One Texas family discovered that the famous Ben Enwonwu painted a piece of art they’d been holding onto for years. Upon finding this out, they also found out the artist had recently made headlines for a painting he did of Nigerian royal princess, Adetutu Ademiluyi.

They handed the painting over to Sotheby’s London and made a heck of a lot of money (over $1.4 million).

Portrait of a Lady (Gustav Klimt)

After several years, a gardener at the Ricci Oddi modern art gallery found the missing Portrait of a Lady right in the back yard. Many had thought it had been stolen back in 1997, and of course, there were tons of theories around who did it and why.

So, everyone was surprised that had been locked in a shed covered by ivy all these years. Today, the painting is worth over $60 million.

Since the invention of LiDAR technology, which allows airplanes to fly over and take topographical readings of landscapes, Mayan sites have been revealed all over. More recently, a scientist was reviewing some previously made maps and discovered 27 sites that spread across 4,000 square miles of land.

These sites are buried under dense vegetation in the jungle, making them nearly impossible to get to. But it’s something special just to know they exist.

The Mocking of Christ (Cimabue)

Another surprising find came from a tiny kitchen in France. An older woman had a religious painting over her mantle for many years until she called an auction house to help her get rid of some household items.

It was only then that she found out it was a missing piece of a larger alter piece done by Cimabue. A painting that was worth many millions of dollars due to its meaningful glimpse into medieval life. The missing piece went up for auction and fetched $26.8 million!

While undergoing construction, an Oscar de la Renta store in Paris discovered an unbelievable 1674 painting. Created by Arnould de Vuez , it was behind one of the walls they tore down. The large painting immediately caught the attention of everyone on-site, and an art historian was called.

It was carefully restored, and the boutique decided to keep it. You can now see the painter’s work, who was once on the court of Louis XIV, in the shop.

It’s incredible where you might find a historic painting hiding behind a wall or hanging in someone’s everyday kitchen. For art buffs, it’s a dream come true.

These are just a few of the exciting and quirky finds of 2019. 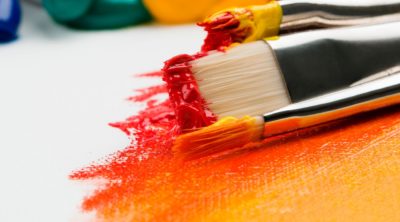 These Historically Influential Artists Have Made The Biggest Impact On Art