The Characteristics of Renaissance Art are So Very Interesting

Art works of the Renaissance period are exemplary of the creative genius that existed in that era. These works have had numerous interpretations over the centuries, but everyone agrees that some characteristics remain synonymous with the period.

Home / Uncategorized / The Characteristics of Renaissance Art are So Very Interesting

Art works of the Renaissance period are exemplary of the creative genius that existed in that era. These works have had numerous interpretations over the centuries, but everyone agrees that some characteristics remain synonymous with the period.

Evolution of Renaissance art took place in three stages, namely, Early Renaissance (1400-1475 AD), High Renaissance (1475-1525 AD) and Late Renaissance or Mannerism (1525-1600 AD). A lot of changes in art took place during these time periods. Primarily because rich Italian families, whose businesses were flourishing, started patronizing many artists. With this new-found financial support, there was a drastic change in the behavior and thinking of the artists. They outright rejected the medieval art emphasis on religion and after life, thus starting a revolution in the field of art. There are some characteristics that are symbolic of this period.

Characteristics at a Glance

Now let us take a look at how these characteristics were reflected in the works of the period during its different stages.

“There is no must in art because the art is free“- Wassily Kandinsky.

Unlike the artists of the medieval period, who painted heavenly creatures, the focus of the artists shifted to the human body. Realistic expressions were given to the human figures, be it in painting, architecture or sculpture, and the concept came to be known as Realism. Painters like the famous Masaccio still painted religious themes, but the saints in the paintings wore common people’s clothes and had natural expressions.

The artworks of early Renaissance depicted people carrying on with their everyday activities like eating, dancing, etc., rather than doing something extraordinary.

Modern ideas were embraced, and the focus was slowly shifting from other worldly things as advocated by the church to the present and now. The modern artists of this era started questioning the church. People’s belief in religion started diminishing too and the same was reflected in the artists’ works. “The Arnolfini Portrait” by Jan van Eyck, shows a couple being married in a room instead of a church. Although, the room has a chandelier on which a candle is placed, which in a way represents Christ. Another peculiarity of the painting is that the woman is shown pregnant even before marriage. Such modern ways of living were unheard of during the medieval period.

One more work of art that deserves a mention here is the dome of the Florence Cathedral. Filippo Brunelleschi built round arches for it instead of the Gothic style preferred by the church during those days.

Round arches for the dome of the Florence Cathedral

“If people knew how hard I worked to get my mastery, it wouldn’t seem so wonderful at all” – Michelangelo.

This same devotedness to art, which Michelangelo professes, is observed in the works of other High Renaissance artists as well, who aimed to achieve perfect harmony and balance, in all aspects of painting, i.e. use of color and light, perspective, technical precision, imagination and composition.

The School of Athens – Raphael

Leonardo da Vinci’s “The Last Supper” paintings, Michelangelo and Raphael’s Vatican City paintings are the epitome of creativity that existed in this era.

There was a focus on painting human anatomy. When Michelangelo carved the statue of Moses, he included veins and muscles in the arms and legs.

Another example is the “Vitruvian Man” painted by Leonardo Da Vinci, which studies the ideal proportions of a male figure. High Renaissance art focused on portraying the humans in their most natural form. Nudes were painted beautifully and aesthetically. Artists perfected the art of facial expressions. Leonardo Da Vinci’s “Mona Lisa” and the “Last Supper” are a good example of this.

The artists advocated the philosophy of Humanism through their art works. Humanists believed that humanity is unparalleled, as it connects the mortal world with the spiritual world. Human welfare and human values like secularism were heavily promoted. People began to focus on self-improvement and started doing things according to their likings. The Renaissance paintings depicted people studying Philosophy and Mathematics, rather than worshiping, as was the trend in the medieval art.

“Where the spirit does not work with the hand, there is no art” – Leonardo da Vinci.

Mannerism, from 1525 to 1600, concentrated more on style or manner and less on the substance. There was no newness in the Italian art as the artists of this period only wanted to outdo the artists of the high renaissance period. Mannerists used loud colors and strange themes. They depicted humans with unnaturally long limbs.

The sack of Rome, then a part of Papal states, by the troops of Charles V in 1527, is believed to have caused a major impact on the painters. Painting anguished people became one of the strangest characteristics of Italian Renaissance art. Prominent artists of this period included Giorgio Vasari and Giovanni da Bologna. Michelangelo was one of the few artists of high Renaissance, who continued painting during this period.

Renaissance didn’t remain concentrated to Italy though, it spread to other European nations as well. Northern Renaissance art characteristics included the use of Gothic style as against the Roman style of the Renaissance in Italy. Even the human figures depicted in Northern Renaissance art, although very realistic, were unlike the ones used in the Italian art. Symbolism i.e. objects used to denote an altogether different meaning, was widely used. Prints i.e. use of woodcut to create images, was also a very prominent feature of the northern Renaissance art. The artists used to make drawings on wood. The untouched part of the wood was then cut off and the raised portions were inked. In the end, the wood was pressed against a paper or fabric, to create paintings.

▶ In Renaissance art, human emotions were depicted liberally. Medieval art made lesser use of emotions.

▶ Humans were very natural and lifelike. They had realistic expressions unlike the humans depicted in medieval art.

▶ In the Medieval period, the art was simple and mono dimensional. The Renaissance paintings, on the other hand, were complicated and had more depth due to the use of linear perspective. The artists showed how things looked different from far and near.

▶ During medieval period, the artworks had religious themes and were inspired by the Gothic culture. There was a great influence of Rome and Greek ancient art works on the Renaissance artists and they preferred to paint Greek gods, Greek goddesses and Greek philosophers. Even the architects built Roman style round arches, which were considered against the Church ideals. Such architecture was unthinkable during the medieval period.

The Renaissance art shows the kind of intellectual development that took place during those golden years of art. Even today, the artists of contemporary art, use this information which is available, to enhance their paintings. These artworks teach us human values which have been long-lost in today’s world. As Thomas Merton puts it, “Art enables us to find ourselves and lose ourselves at the same time.“ 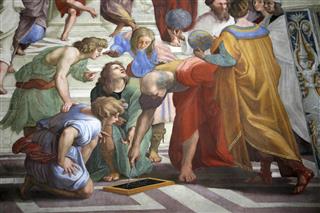 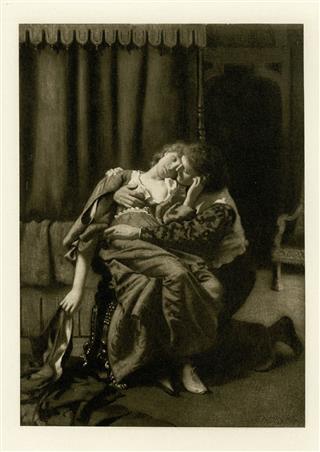