Romanesque art was an art form that was significant in the architectural patterns in Medieval Europe. Symbolized by semicircular arches and strong pillars, many cathedrals that were built during this period were inspired by this art form.

Romanesque art was an art form that was significant in the architectural patterns in Medieval Europe. Symbolized by semicircular arches and strong pillars, many cathedrals that were built during this period were inspired by this art form.

Romanesque art form flourished after the fall of the Roman Empire.

Art is the mirror that depicts any culture. Art is influenced by thoughts, faith, and religious systems. Most beautiful art forms of architecture and interior designing can be found in places of worship. Every era is symbolized by a cult art form, which, of course, undergoes changes and gives way to another art form.

One of the art forms that symbolized the Medieval period of European nations such as Rome, Italy, France, Spain, England, Austria, etc., was the Romanesque art form, and can be traced around the time of 1000 AD.

History: This art form developed after the fall of the Roman Empire. After their fall, Christianity became the officially accepted religion. Thus, there were many cathedrals, monasteries, places of worship, etc., that were required to be built, which required large structures to furnish enough space for the pilgrims. Roman architects found an ingenious idea as a solution to this problem. The vault structures with arches helped hold the pillars. Romanesque art later evolved into Gothic style, and that was taken over by the Renaissance style.

► Basilican Structures: Basilica were large structures that were used for public gatherings during the Roman Empire. However, with the advent of Christianity, it is referred as a ‘place of worship’.

► Large Spaces: These were made for pilgrims and devotees, and public gatherings.

► Barrel Vaults: The use of barrel vaults was necessitated due to masonry constructions. It gives a ‘tunnel’ look with the use of one or multiple semicircular arches. This helped in holding pillars, and also created more space.

Cathedral and Tower of Pisa

Apart from being one of the seven wonders of the Medieval world, the Cathedral and the Tower of Pisa, both exhibit the Romanesque style. Though the Leaning Tower of Pisa’s popularity can be accredited to its famous ‘lean’, its beautiful structures are inspired from this art form. Today, it stands as a part of UNESCO’s World Heritage site.

This is one of the four patriarchal basilicas of Rome that has been designed in this art style.

This magnificent cathedral is one of the most beautiful testimonies to Romanesque art. It has beautifully embellished roofs that boast of this art form’s aesthetics.

Located in England, it is a major tourist attraction for many, especially pilgrims. It bears a testimony to the sacrifice of Britain’s first martyr who supported Christianity, and was prosecuted for the same. The cathedral portrays a blend of different styles of art, one of them being the Romanesque style.

The walls and windows of the cathedral were adorned with paintings and sculptures. Stained glass paintings depicting various Bible scenes was one of the key elements of the Romanesque art form. However, the Gothic style of painting differed from this style, with their advanced style.

Sculptures were an innate part of Romanesque architecture. Cathedrals displayed religious sculptures. Building structures were also ornamented with sculptures of human figures and other decorative elements.

Words cannot describe the beauty of the Romanesque art form, and there are many more monuments and buildings besides these that have been designed in this style. Though this art form was replaced by the Gothic art style, numerous cathedrals and buildings stand as a tribute to this beautiful arched art style. 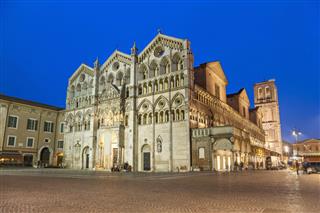 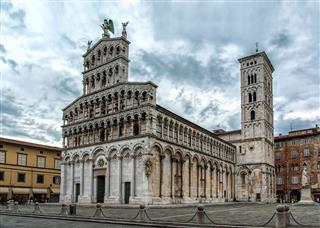