Here are some simple and easy-to-follow step-by-step instructions for kids to draw a cartoon monkey. Try all or any of the three cartoons we have created to develop your drawing skills. 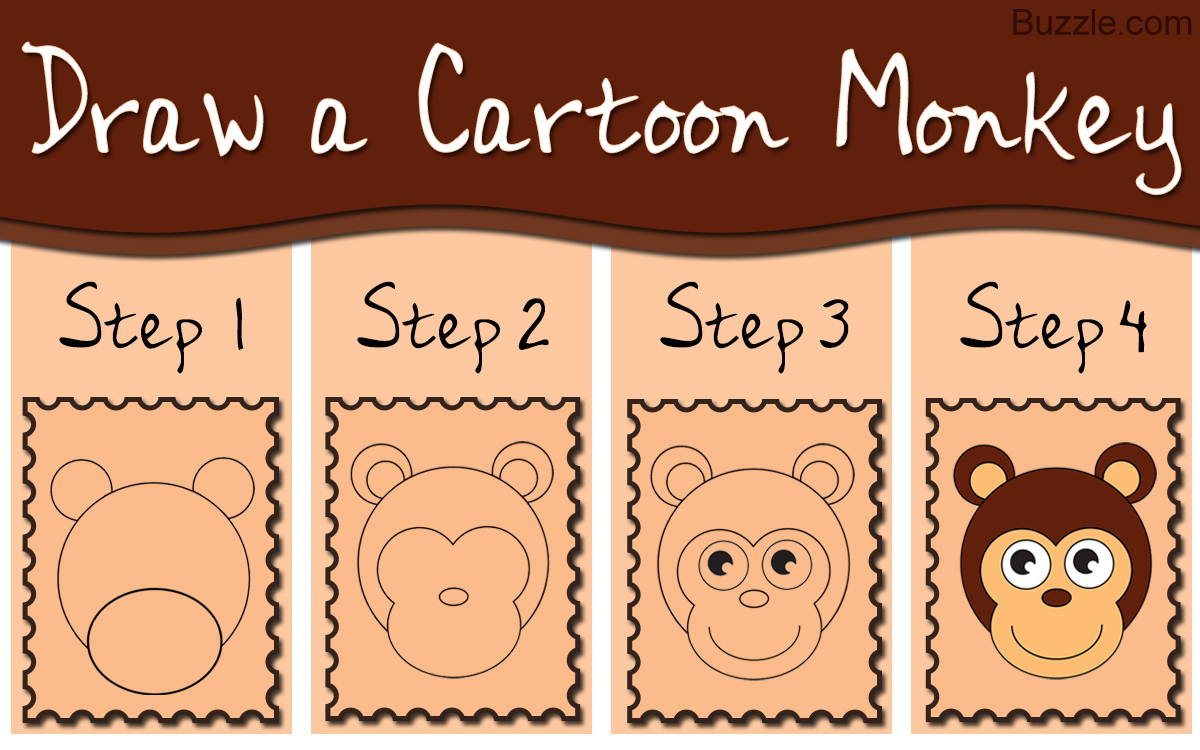 Here are some simple and easy-to-follow step-by-step instructions for kids to draw a cartoon monkey. Try all or any of the three cartoons we have created to develop your drawing skills.

Use a compass or cylindrical object to draw the circles for these cartoons.

Drawing becomes easier once you have a reference to guide you, and the more you practice, the better you become with every drawing.

If you enjoy watching monkeys in the zoo and reading about them in storybooks, you could try drawing this funny animal to improve your drawing skills. We at ArtHearty show you some easy step-by-step instructions to draw a cartoon monkey.

This step requires making the geometrical outline for the main drawing. Draw a big circle to make the main face of the monkey. Thereafter, draw a smaller circle at the lower half of the first circle. This will be the area where you will make the nose and mouth in a later step of this cartoon. Now, to make the ears, draw two semicircles on either sides of the monkey’s head.

To create a layered effect, draw even smaller semicircles within the ears. Thereafter, partially erase the smaller circle that made the mouth region, and draw a broad letter ‘U’ while making it face upside down. Connect the erased end of the circle, and trace it along the monkey’s face so that it forms a heart-shaped forehead. The main shape of the monkey’s face is complete.

Now, it’s time to make the eyes and mouth of the monkey. To do so, draw two equal-sized circles that will make the eyes of the animal. To make the nostrils, draw two smaller U’s within the nose. In order to draw the mouth, draw a small circle away from the nose. Fill the mouth with color immediately so that you know the difference when you’re coloring the entire drawing at a later stage. Draw another letter ‘U’ under the mouth to show the lower lip.

Now that the face is drawn, you must color it to make it look like a real monkey. Choose two shades of brown, a light and darker shade, and the color black. Use the lighter shade of brown to color the inner face and ears. Color the outer parts of the face with the darker shade of brown. Now, color the eyes with black and leave a little portion uncolored to make the eyes seem as if they are sparkling against the light. Your drawing is complete!

Image 2: Draw a Cartoon Monkey on a Tree

Begin by making the geometrical outline of the monkey’s face by drawing one circle and a semicircle that meet each other midway. Draw semicircles to make the ears of the animal. Now that the face is drawn, make a big pear shape under the face. This will make the main body of the monkey. To make the arms and legs, draw the letter ‘L/V’ four times in a slanting manner. Thereafter, draw another four ‘L/V-shaped’ lines to make the hands and legs look fuller. Make sure that you join the ends of the arms and legs with small curves and not make them look too pointed or sharp.

Retain all the lines inside the main outline of the monkey, such as from the face and pear-shaped body. Draw the hands and feet and connect them with the arms and legs. Thereafter, draw a long curving tail and make it look thicker by adding another curve along the tail.

Draw the monkey’s inner ears and forehead within the main face. Similarly, draw a smaller pear-shaped design inside the main body. Make curves inside the hand and feet to show fingers and toes. Thereafter, connect the parts where the hands meet the arms and the feet meet the legs.

We shall focus on drawing the details of the monkey in this step. Start by drawing the eyes. Make two small ovals with even smaller ovals inside them. Thereafter, to make the nose, draw a broad and blunt ‘M’ with two smaller U’s within it. Make a large vertical curve below the nose and connect to the monkey’s mouth. Give the monkey a broad and happy smile with smile lines/dimples. Now, draw 3 – 4 curves on all the hands and feet so that these look like fingers and toes. Make horizontal curves on the hands and feet to show folds. To make the tree, draw thick branches and make the monkey’s tail wrap around one of the branches.

Here comes the fun part where you get to finally color your drawing. For this drawing, you will need the color black, light brown, dark brown, and any shade of green. Start by coloring the inner outlines of the ears, face, and body with light brown. Color the hands and feet with light brown as well. Thereafter, use a darker shade of brown to color the outer parts of the monkey’s body such as the ears, face, torso, arms, legs, and tail. Color the inner ovals of the eyes with black and leave the outer oval white. Color the nostrils with black and darken the black outline on the monkey’s mouth. Now, color the branches with green to show that the monkey is actually hanging from a tree!

Image 3: Draw a Monkey with a Banana

This step is similar to the one required for drawing the step 1 of the previous cartoon monkey. All you need to do is draw a basic outline of the monkey’s face and make a pear-shaped body. By now, you may have had enough practice, and therefore, you need not use two intersecting circles to make the face. Draw the double ‘L/V-shaped’ hands and legs. Draw a curve at the knees to make the legs look bent and the monkey seem as if it’s squatting.

Make the ears by drawing two semicircles on either sides of the monkey’s head. Do not erase any of the inner curves from the cartoon’s body. Now, start drawing the right hand of the monkey and make four fingers. Draw the left hand, and make it hold the outline of a peeled banana. Finally, draw the feet and a long tail and give it a parallel curve for the tail to look thicker.

This step is very easy and simply requires that you make a heart shape for the forehead and draw a curve to complete the shape of the face. Thereafter, make the curve of the left arm. Connect both the hands with the arms and feet with the legs. Now, draw three banana peels.

Once again, this step involves drawing the details of the cartoon monkey. Begin by drawing the inner outlines of the ears. Draw two big upside-down U’s within the heart-shaped face to make the eyes. Seal the U-shaped eyes from below, and draw small ovals inside it with two very tiny circles within the ovals. Draw the nose and connect it with a W-shaped upper lip with a vertical line/stroke. Keep the monkey’s mouth open by connecting the upper lip with a wide U-shaped lower lip. Draw the monkey’s tongue in the shape of letter ‘M’. Thereafter, draw the banana over the peels. Finally, draw three curves on each feet, to look like toes. Add some curves on the monkey’s right hand to show folds in the palm.

The final step involves using the colors light brown, a very dark shade of brown, black, pink for the tongue, and yellow for the banana. Color the inner face and ears, hands, and feet with light brown. Thereafter, color the outer parts of the monkey’s body, nose, and inner mouth with dark brown and color the tongue pink. Use black to color the bigger ovals inside the eyes and leave the tiny circles within the oval uncolored. Paint the banana yellow and use a slightly darker shade of yellow to color its peels. Use a darker shade of brown to highlight the curves and folds on the hands, palm, and feet. Congratulations, your cartoon monkey is complete!

So, gradually try out the three easy ways to draw cartoon monkeys, and remember to enjoy every step and learn along the way!