These 5 Facts on Aboriginal Art are Simply Mind-blowing

Aboriginal art uses symbols and signs to narrate the origin of the universe and other mythological tales. 'Warlugulong' was sold to the National Gallery of Australia for a hefty amount of $2.4 million!

Aboriginal art uses symbols and signs to narrate the origin of the universe and other mythological tales. ‘Warlugulong’ was sold to the National Gallery of Australia for a hefty amount of $2.4 million! 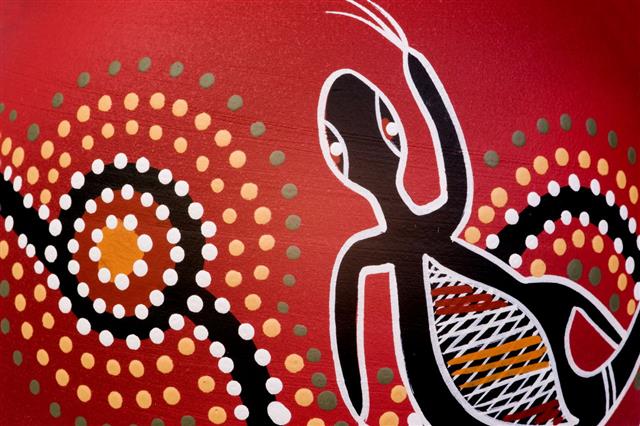 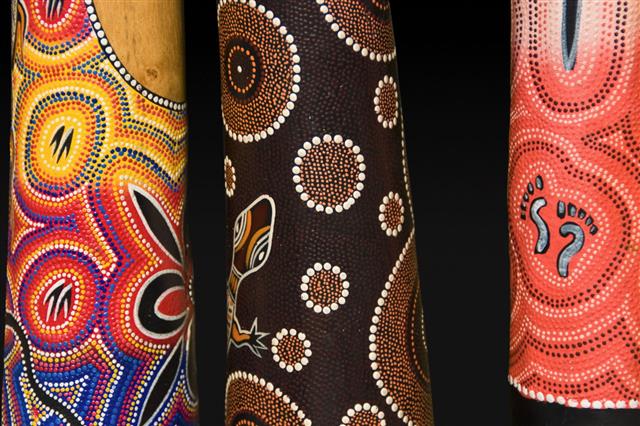 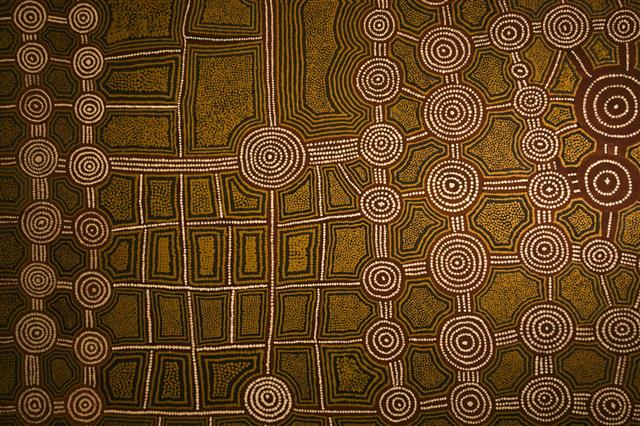 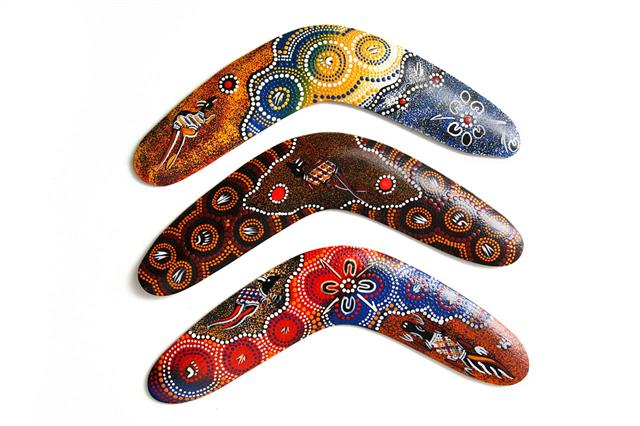 The Aborigines are the original inhabitants of the continent of Australia. They have been living on the continent for almost 40,000 years now, in close-knit groups or clans. They live a semi-nomadic existence with hunting and gathering as their primary way of subsistence. Owing to the fact that the communities of the Aborigines were isolated from the ‘civilized’ world for thousands of years, they developed their own customs, traditions and belief systems. They spent much of their time by indulging in activities such as telling their mythical tales, merrymaking and putting their thoughts down through the medium of visual arts. In fact, Aboriginal tangible visual arts, which include paintings, engravings, carvings, sculptures and the like, seemed to be their only way of communicating their thoughts to the rest of the world, especially, in absence of a defined language or script.

Aboriginal picture with mom and baby

Based on their ‘Creation Myths’

Every art form that is Aboriginal, is primarily based on their ancient myths and legends. Even the modern pieces of Aboriginal art are based on ‘the Dreamtime’, a set of their creation myths. These ‘Dreamtime’ myths, which are more than 50,000 years old, are a great storehouse of their oral heritage which has been handed down from generation to generation. Interestingly, our only source of the ‘Dreamtime’ stories, of course other than the Aborigines themselves, is Aboriginal art, owing to the fact that we have no written sources of the same.

The Aborigines did not seem to believe in the philosophy of ‘art for art’s sake’. On the contrary, the Aborigines wrote through their arts. We get a large number of references with respect to their day-to-day lives, festivities and celebrations, modes of pastime, religious beliefs, social structure, hunting practices and so on. Apart from being a mode of expression and depiction, art was also used as a platform to maintain secrecy. After the colonization of Australia, the Aborigines felt that their spiritual and clandestine knowledge was in danger, and so it was thought that there needed to be a system with which they could hide it from the eyes of ‘outsiders’. The famous Aboriginal dot paintings resulted from this fear. It is believed that the dots were purposely made over holy symbolic depictions so that they could obscure the sacred knowledge.

More than what Meets the Eye

The depictions of Aborigines were naturalistic, as well as abstract in nature. The term ‘naturalistic’ refers to the depiction of natural surroundings, flora and fauna. So, we have depictions of animals, plants, people and other natural phenomena in various forms. On the other hand, the term ‘abstract’ refers to depictions, which may seem unrealistic at a first glance, but may in actuality possess much deeper connotations. So, we also have a huge array of drawings with geometrical shapes and symbols, which we, as the ‘other’ may not understand, but the Aborigines would definitely do.

Use of Natural Colors and Stabilizers

The colors used for their paintings were obtained from natural and locally available materials, predominantly ochre, a natural mineral, which was ground on a stone slab while adding small amounts of water and stabilizing agent. Red, yellow and white colors were obtained from different pigments of ochre, and so we see a wide usage of these colors in Aboriginal paintings. Black was obtained from charcoal, but was rarely used owing to the complicated procedure of making it. Olive color, which can be seen in some of the paintings was obtained by mixing black and yellow colors. It is very fascinating how the ancient Aborigines figured out a natural resource in the juice of an orchid plant, which could be used as a fixative to avoid flaking or peeling of the paint. Modern Aboriginal artists on the other hand, use artificial colors as well.

Modern techniques of depicting Aboriginal art forms on canvas and paper, came into being some 40 years ago in 1971, when a school teacher named Geoffrey Bardon, noticed a group of Aboriginal men telling stories and drawing symbols in sand. This caught his interest and he encouraged those men to depict their stories on canvas and paper, two media, which were completely alien to them before that day. Thus started the famous ‘Aboriginal Art Movement’ which encouraged more and more Aboriginal artists to present their works before the world and become famous. Some non-Aboriginal artists also showed their interest in this art form, and began to practice it. Not surprisingly, Aboriginal art is considered to be the most inspiring contemporary art of the 20th century.

♣ Bark paintings are the oldest forms of Aboriginal paintings. However, not many of them survive today due to natural disintegration of the bark.

♣ Aboriginal art symbols are collectively known as iconography. Aboriginal people traveled long distances across their country and recorded information regarding their travel in the form of symbols.

♣ A particular Aboriginal art symbol would have multiple meanings. Only an Aborigine, who knew his history and culture would be able to decipher what symbol had what meaning in what context.

♣ Numerous Aboriginal paintings have been discovered on sacred sites. This throws light on their sacred connotations.

♣ As remnants of the ancient Aboriginal culture, we have what has been termed as ‘aerial landscape art’ created across the Australian deserts. These cannot be figured out easily from the ground level, but a bird’s-eye view of these sites gives us a feel that we are actually looking at wonderful sculptures.

♣ The X-ray style paintings are one of the distinctive features of Aboriginal art. Apart from the outer bodies of the animals/humans, the internal organs and bones are also depicted in them. This also shows that the ancient Aborigines did have an idea of animal/human anatomy.

♣ There are two museums, which have been specially dedicated to the Aboriginal arts and crafts. These are the Museum of Contemporary Aboriginal Art, located in Utrecht in the Netherlands, and the Aboriginal Art Collection of the University of Virginia, known as the Kluge-Ruhe.

♣ Body painting is an art that is of great cultural significance for the Aborigines. The motifs, which are painted on their bodies, particularly during religious ceremonies, not only signify their social status, but also depict totemic symbols of various clans by which they can be identified.

♣ Aboriginal art forms include their sculptures and specially carved pearl shells called ‘Rijis’. Sacred patterns are carved on these shells, thus giving them religious affiliations. We also have a number of small sculptures of imp-like creatures, locally known as the ‘Mimis’. They are believed to have taught the Aborigines’ ancestors to hunt and to make use of fire. Hence, they are revered beings.

Aboriginal art thus forms a major portion of the heritage of humankind. This, longest surviving culture in the world, is so rich in knowledge and spirituality, that it has also managed to withstand all the adverse situations and still survive. These difficult times, their struggle for survival, only made them more proficient in their cultural knowledge and strengthened their artistic expressions. Today, with the commercialization of Aboriginal art, more and more new artists are coming into the limelight and acquiring great name and fame. 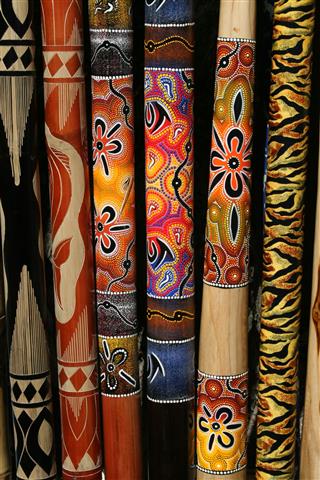 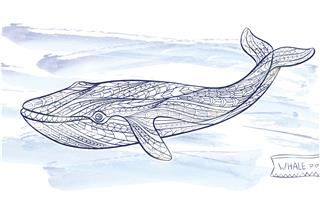 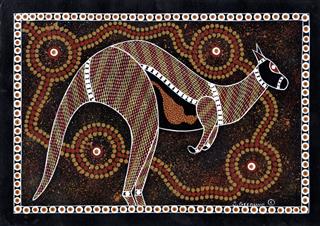 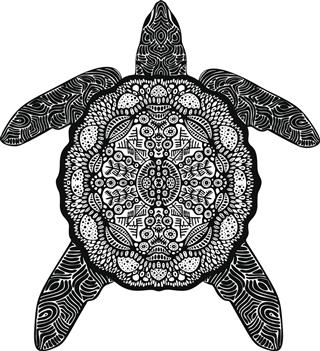